How to remove <none> images after building

docker system prune will do the work. It will remove any unused images though. but I am sure, all worthy images should have been pushed to the registry so it should be okay to prune it, depending on your environment though.

If you are running Docker For Windows, the following will work:

To remove all images which aren’t associated with a running container:

The -a parameter is the crucial bit here.

If you want to force the action to occur without a confirmation prompt, you may add the -f parameter, like so:

Note: -af is the same as specifying -a and -f separately

If you are like me and keep trying out interactive terminal sessions on images all the time, you will see a lot of : images in the list. They are all linked to stopped containers that you used earlier. Cleanup containers and then cleanup images

This worked for me;

Shows all images, copy the ‘Image ID’ of the one you want to delete

Command to delete, paste image id, without <> and hit enter

##Visit your friends at;
www.shenko.org

This works on my end. Removing all or unused images.

Removing the double quotes from the dangling options solves the problem

received the response while trying with this command. Tag and repositories might be linked to some active repositories.
Command:
docker rmi $(docker images -a|grep "<none>"|awk '$1=="<none>" {print $3}')
Response:

sometimes we may need “f” for forcing to remove containers

I’ve came across the same problem and have written a solution on Stack Overflow, which I will reproduce here.

You can label the intermediate images and docker image prune those images based on this label.

After you’ve built you image, run:

If you are running the builds in an automation server (e.g. Jenkins), and want to remove only the intermediate images from that build, you can

If you want to persists the build ID in the image (perhaps as a form of documentation accessible within the container), you can add another ENV instruction that takes the value of the ARG build argument. This also allows you to use the similar environment replacement to set the label value to the build ID.

This worked for me

--force-rm seems to prevent leaving <none>:<none> images when I use docker-compose to build images like so:

I don’t know why it works. The doc (https://docs.docker.com/compose/reference/build/) says --force-rm always remove intermediate containers but not images.

This works for me.
docker image prune -f

docker images -f "dangling=true" -q lists one image per row, and docker rmi expects them to be separated by space rather than newline, so you have to join them together before calling docker rmi if there are multiple images that need to be removed. This is the command that works for me:

Thanks! Copy-paste does not work because of the quotes. But the code works anyhow.

you are right， but need in the powershell

Hi all,
I tried the docker rmi $(docker images -f “dangling=true” -q) command and it worked for me. 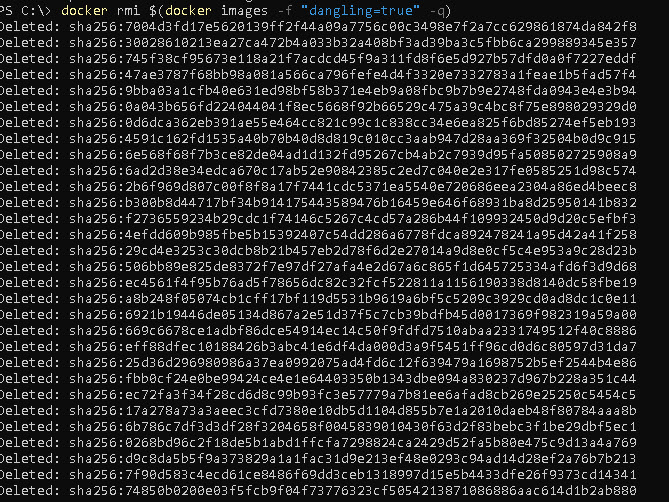