Can I run a script outside of container?

I am working on my first Docker deployment and run into issue which I have tried to resolve from several hours.

I have a bash script in Docker and want to run it on host, not in the container. Why? I am not able to resolve the issue with sudo inside of Docker, I mean each time I got errors when I try to execute that script in the container:

So I thought, that I run the script from the host to ommit those issue on Docker? If it works like that … Since on the host it works without any issues.

It doesn’t make sense to run a container just for breaking out and running a script on the host, but you can run an API service on the host and send a request to it from the container. By “breaking out” I mean you could run a privileged container, disable pid namespace and attach to all of the namespaces of PID 1 and execute a script there. It is much better to use an API and let the API service execute the script on the host. Are those NodeRED modules? Actually that would be the best way if …

As for sudo, it can be configured in docker images as well, although it usually doesn’t make sense, so the question is not if you can run a script in a container but where you need to run it.

About the first one, why it does not make sense to use sudo inside of a container? Just for my knowledge.

Regarding the second one, I need to run that script in the container but it was written like that to call out ‘sudo’ several times and that’s why It can not be executed. Give me the hints

If all you need to do is run a script that requires sudo inside the container then one solution might be to simply install sudo in the image before running the script. Depending on your base image, it goes something like this:

If the image you are using isn’t running as root you would need to use USER root before installing sudo and then switch back to whatever user the image is using.

Sorry, I forgot about this topic.

About the first one, why it does not make sense to use sudo inside of a container? Just for my knowledge.

Because you can run the container on behalf of any user. Including root which doesn’t need sudo.
If you install sudo in a container and run the container as a non-root user that user has to be in the sudo group.
You also need to configure sudo to work on at least the script you want to run without password (passwordless sudo). Depending on what that script does it could be dangerous.

If the script uses sudo just to run some commands as a non-root user (sudo -u ubuntu -H whoami) that’s okay. If this is the case, you really need sudo and you can run it as root. If it is not the case and sudo is used to gain root access and if the container is running as root, you can just add a simple script to the path called sudo which only executes the arguments

so you don’t need to install sudo.

When someone develops a new application, I heard about using gosu rather than sudo. 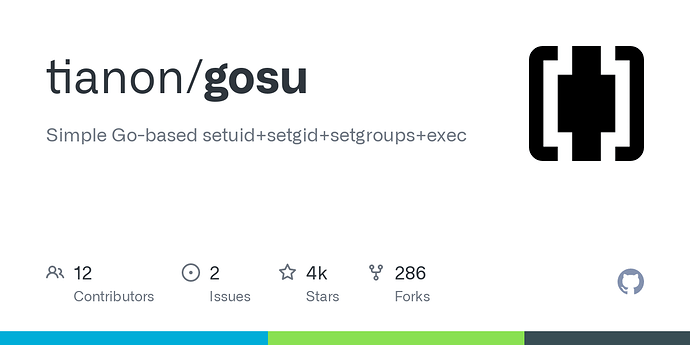 Simple Go-based setuid+setgid+setgroups+exec. Contribute to tianon/gosu development by creating an account on GitHub.

You can read in the readme why gosu exists. Since you are using an existing script, I guess you need what @rofrano suggested or the short script that I suggested using exec to run any command as is (only if the container is running as root and you don’t want to run those commands as an other user.).

I tried that method. I am using Fedora image:

Thanks for the deep reply.

Yes, in fact script calls out several times ‘sudo’ and I would like to run it as root but I do not know why the script does not work like on my Host:

sudo works in the fedora:37 container. If you could share

that could help a lot to find out what causes your issue.
Your first post already showed that the container had sudo installed, but I thought you tried it with a non-root user. Later I forgot about the first post…

Docker versions before 20.10.9 are known to be incompatible with newer linux distributions (in containers), but this specific error message is new to me.

It is a good question, so I shed a bit light on that. If you know my goal it will be easier to support I believe

1 stage: I want to prepare my base_image based on fedora OS. That’s why I have configured proxy so far, install several packages, now I want to run several script and commit it.
2 stage: I want to use that image and only to change packages I want to use bash script with some variables pass to Dockerfile to tell the container which package to download.

So coming back to your question:

@rimelek did you have a time to look into my previous post? It would be beneficial to know how to run that script in the contianer.

Thanks for reminding me. I don’t have a Fedora host. Can you check if it works for you on a debian based host for example? To be honest I don’t know why that would matter, unless sudo sends some syscall that is not supported on your fedora host, but I don’t have more ideas.

I had a CentOS host. Sudo worked on that too in the fedora container. Then I tried to enable selinux. I had to reboot the VPS and now I can’t login. No problem, I already cancalled that VPS that’s why I tried this setting, but you can try to check if your fedora host has selinux enabled:

I don’t know if that can affect sudo in the container.

update 2:
I managed to login using VNC instead of SSH and sudo still worked in the container.

In fact it is disabled on my server:

I need to check with another Linux’s distribution and let you know. Thanks for reply