What is your exact full error message? Public key should be accessible, but private keys must be readable only by the owneer, If you generated the keys on Windows and mounted into a Linux container, that means your keys are probably readable by everyone. Although you wrote in the title you mounted the keys “as a volume”, if it is actually a bind mount where you mount a folder from the host that might not work. The best way is to generate the keys in a container into an actual named volume and mount that in the container where you need it.

Note that the keys must have the right ownet as well. If you generate the keys with a user who has the UID 1000 and then try to use that in a container in which the UID is 1002, that will not work either.

Furthermore, I think it makes sense to share the Dockerfile and the command/compose file that triggers the build. 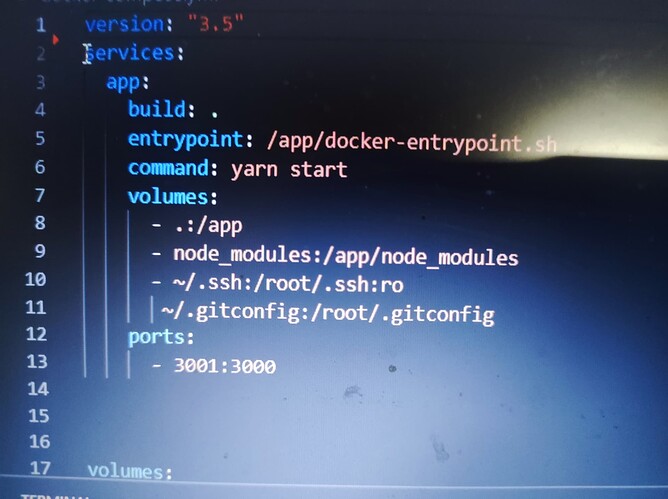 Ps:i am working on docker windows so my question what is the right way to do it ?

this is the docker file :

i made a wrong assumption: I thought you try to clone the repo during image build…
though, I don’t see any git related command in either your Dockerfile nor in your entrypoint script.

Your compose file misses a - for the last entry in the volumes sequence. I am surprised docker compose didn’t complain about it…

Also you need to make sure that you follow the suggestions @rimelek made in his response.

what is the right way to do it ?

I have already told you the only think I could recommend. Please, read my previous post again and ask about the part that you don’t understand so I can explain it an other way.

However @meyay noticed what I could not. That missing “-” before the volume mapping should have given you a syntax error. It is not just invalid compose file, but an invalid YAML file. Maybe you just tried something to fix the problem and forgot to remove that part before sharing. If it happened, make sure you always share the code that you have tested.