How to reach localhost on host from docker container?

How to reach localhost on host from docker container?

Situation: I run a NodeJS app with the monero-javascript library to connect to a localhost monero-wallet-rpc running on my host OS.

Problem: I can not connect!

I thought extra_hosts: - "host.docker.internal:host-gateway" is the trick. Sadly it does not work.

Apart from my connection problem, I would also like to receive further suggestions for improving my configuration file.
Is it possible to seed a MongoDB database directly with data? I have done the trick with another container.

1 Like
Connect to On premise Oracle database from Docker Container
matthiasradde (Matthias Radde) August 2, 2021, 10:28am #2

For Docker running on Windows I have used directly host.docker.internal (without the extra_hosts in the docker-compose.yml) to connect to services running on the WIndows-host from inside a Docker-container.

For Docker running on Linux I have used 172.17.0.1 which is the Docker-host in Docker’s default-network. Maybe not the best way - but it is working

For the other problem (seeding a MongoDB with data) I have done a backup/restore from one mongo-server to another using this command to create a dump on Server A into the directory ./dump/<sourcedatabase>

and this to restore it to Server B:

Maybe this can be used as a blueprint?

Thanks. However, I am not able to fix it yet.
What by meaning without extra_hosts:?
This way creates a syntax error.

From inside my container:

My .env file for my node app:

I don’t know why I can’t connect. I looked into it multiple hours.
Can it be a routing/firewall problem of the host?
I am using QubesOS which can be an exotic animal.

If you need more information/output I will post it here.

works. However, the connection isn’t?

sorry for confusing you.

I meant it this way:
remove the lines

To connect to your host’s localhost from within a container use 172.17.0.1 (as you are running on Linux). It would be host.docker.internal if you running Docker on Windows.

This is neither a requirement, nor is it wrong to use extra_hosts to let the container inject this name resolution into the containers /etc/host. Or you just use the host’s hostname or ip.

Do I need to adjust my .env file as well?

How can I check if docker is not the problem?

I created a stackoverflow question with much more detail. This bugs kills me. Maybe you can have a look:

Does not work!
Please have a look into the stackoverflow question.

have you found any solution yet?

Pathetic lack of clarity! So is an IP required or not? Can you use internal docker names or not? It seems not, but if not then why? Why should you not be able to inject hostnames of other docker containers into /etc/hosts? If a container is called “app” then other containers can “ping app” via docker networking. So, why can I not inject “app” into a /etc/hosts?

When a question is not clear, there is a good chance the answers will not clear either. It always depends on the exact case.

The title of this topic is “How to reach localhost on host from docker container”.
Since there wasn’t any example how the OP started the app on the host, based on the docker-compose.yml and how the OP tried to use the extra hosts, I suppose, everyone thought the nodejs app was listening on each available IP address on the host. Later @scottbarnes2 shared a link to stackoverflow where the example shows that the nodejs app was actually running on the host’s localhost (127.0.0.1).

Can you use internal docker names or not?

If you are referring to the internal dns resolution, the anyswer is yes. You can use that between containers running on the same custom docker network.

Why should you not be able to inject hostnames of other docker containers into /etc/hosts?

Why do you think you shouldn’t? You can add extra hosts but that doesn’t help you to reach a port on a network which is not available from the container.

Since the OP could have different problem than yours, can you explain what is your issue exactly? Please, add details to help us understand what you want to achieve, how you tried to solve that and what are the error messages.

Apologies for any impatience. I’ll stop trying to convert OP’s issue into my issue, and just explain my exact issue:

I want a FQDN to resolve using /etc/hosts + self-signed SSL cert. An app in the container needs to access the FQDN, but this FQDN needs to be simulated in a dev environment. So on the host I have the FQDN in /etc/hosts and I have a self-signed cert correctly setup with docker for each FQDN in question. The FQDNs are bound to each docker container running on the host. Of course each container can ping each other using its service name, but how can I allow each container to connect to another using its FQDN?
So the idea was to add an /etc/hosts per container that converts each FQDN into the correct IP to connect to each respective container. However, those containers are setup programmatically, so I’d rather not statically reference each IP in the “extra_hosts:” entry. How can I do this dynamically (whereas each FQDN = a service name)?

If you add a host to your hosts file on the host machine, containers will not be able to use that unless the containers use the host network. Since you wrtote that you would not use the extra_hosts parameter and using the host network would be even more problematic, I would say try to configure a local DNS server and set that DNS server on the Docker daemon. dockerd | Docker Documentation

You can search for something that dynamically handle your domain names. I found this project but I haven’t tried it so I have no idea if it works or not. 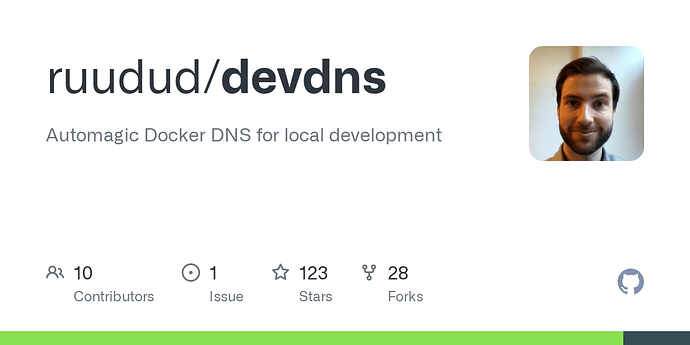 Automagic Docker DNS for local development. Contribute to ruudud/devdns development by creating an account on GitHub.

If it doesn’t work, try to search for an other.

Hello,
another simple and useful solution to resolve this problem with Compose is to use “network aliases” : Networking in Compose | Docker Documentation