forgive me I am kind of new to this so I probably made a number of stupid mistakes. I am trying to launch Rocket.chat utilizing docker-compose. when I start it using,

everything works shows to be working fine when I run “docker ps” the instance shows as running along side mongodb as is expected.

the changes I made are the rocket chat image has been changed from latest to the current stable release.

“traefik.http.routers.rocketchat.rule: Host(192.164.1.134)”
OG had " Host(${DOMAIN})"
The tutorials didn’t tell me what to put here but when I tried to run it without moding it it kept flagging it say “domain” was undefined.

Deploy_platform I’ll be honest I do not know what I am supposed to input here so far nothing has worked but I have “DEPLOY_PLATFORM: ${Linux}”

the only other change I made was a few of the lines had an issue with “$” and according to what I found online the solution is to add a second “$” so that is what I did. in the file I pulled from git none of the lines had 2 “$” so I am not sure if that was the right thing to do.

oh also this is running on docker on a Ubuntu VM in Proxmox.

If you compare the original file and your modification, you should immediatly be able to spot some problems: 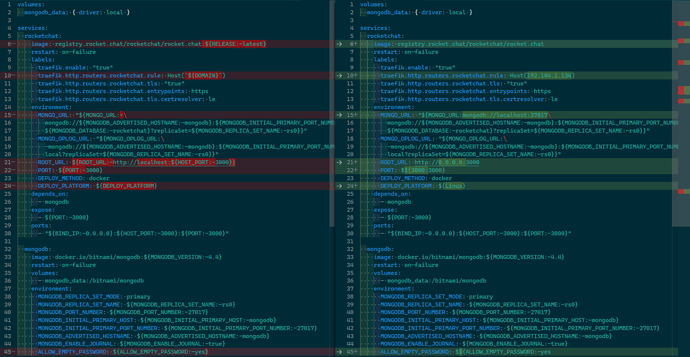 The compose file expects you to use an .env file (in the same folder as the compose.yml) - here is the github repo that shows how the file should look like: GitHub - RocketChat/Docker.Official.Image: OFFICIAL REPOSITORY rocket.chat

Basicly: throw away your file, start with the clean compose.yml and use an .env file to assign the values.

all the tutorials I was following conveniently skated right on past creating the .env file but that was definitely the issue. thanks for the help.