Is it possible to runn docker engine on android devices

as android uses linux kernel so will it be possible to run the docker containerized technology in android so that to run different apps on it.

Based on the documentation here: https://docs.docker.com/engine/installation/ , the docker engine is not currently supported on any version of Android. This sounds like an interesting suggestion and request. You may want to search the issues at the docker/docker repo on github for any similar requests, and if none exists, considering adding one.

thanks … i will look forward to it.

I’m using Termux and I’m impresed how good it works for node.js. I was looking to do the same, run docker commands from my Termux terminal. Please post here if you find something of interest about Docker containers on Android.

With solutions like Samsung DeX or Huawei EMUI, docker on Android could be a big step forward for developers and people in the IT.

Same for me, I suppose it won’t take long before mobile phones replace laptops completely. I now mostly hook up my laptop to a big screen at home and at work… Might as well hook up my smartphone. Not a lot of difference there I’d say…

I’ll try and see if I can find anything about it in the requests.

Looking forward to this, thanks.

I just don’t want to see all the computing power wasted on my old phone. Can’t wait to see docker swarm running on Andriod

I already running dockerd in android, after custom the android kernel, look pictures below:

adb connect to the device, and the output of docker -v 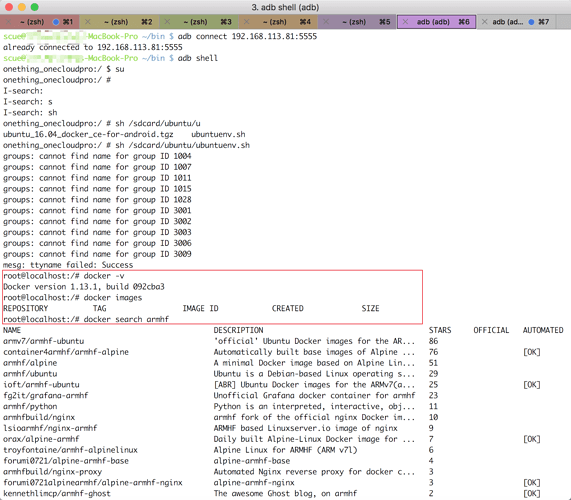 Finally. Great work. Can you share more details? Which board? RPi, or tinker?

Great work. Is this open source and available for others to use?

So I’ve build the latest docker client (docker) & server (dockerd) on my android, though only the client is really working. (e.g. specifying the DOCKER_HOST which is running somewhere else).

The docker server (dockerd) cannot run because it needs an access to the cgroups/namespaces which is restricted on non-rooted Android. (probably by the SELinux policy?)

Maybe someone can try with the rooted Android?

Here are my instructions for building the docker client & server on android itself. It’s pretty fast, less than 5 minutes.

Any new Infos? I could imagine an all-docker-based-androidlike-os-mobile and we could all have docker client and sever in our hands.

Which Android device you are using?