I just installed Docker Desktop on my new Macbook, but suprisingly it doesn’t contain Docker compose:

Docker-compose (v1) does work, but when I check the “Use Docker Compose V2” setting, I get the same error. Is this a know issue and/or is there a workaround to start using docker compose v2?

I have the same versions, but I realized I acidentally overwrote the cli plugins so they are symbolic links to different plugins. I have to fix this, so I will reinstall my Docker Desktop, but not right now.

I removed Rancher Desktop which added the links to the CLI plugin, but I still have Docker Compose, so please share the output of the folloving command too:

Thank you for your reply.

LS on the cli-plugins directory says that the directory does not exist:

Output of the ls on docker-*:

Output of the ls on docker-*:

In the meantime, I relized, that will not show Docker Compose v2, only if you enabled “Use Docker Compose v2”, which you tried, but that is not the docker compose plugin, and currently I am not sure where mine is.

Could you try to enable “Use Docker Compose v2” again and then run the folowing command?

It is important to use docker-compose instead of docker compose this time.

I think I have found it:

Both docker-compose and docker compose give this output (when I check said checkbox).

ls -l /usr/local/lib/docker/cli-plugins/docker-* gives nothing back since I don’t have that directory.

Okay. I am going to remove everything now and see what happens when I reinstall Docker Desktop

I have reinstalled Docker. It took more time, since I acidentally installed the intel version three times on my mac with M1

I still have Docker Compose v2. Now i am wondering, how did you install Docker Desktop on your mac?

I have a video about installing it: Install Docker Desktop for Mac like a pro in 14 minutes - YouTube

And I also have an other video about uninstalling it properly when something goes wrong with the installation: Uninstalling Docker Desktop properly on macOS - YouTube

The version of Docker Desktop was different in the video, but the method is the same and I used it again.

Can you try to Uninstall it completely and install it again?

I installed Docker via this link: Install on Mac | Docker Documentation (Mac with Apple silicon).
I installed rosetta, since that was recommended (both with and without gives the same result though).
And I must say, my colleague has the same issue, so it doesn’t seem to be a problem of my laptop specifically.

That will not remove everything. It claims to do that, but some files can still remain on Mac and it can’t remove the application itself from the Application directory. That is why I linked my videos.

I don’t know what other questions I could ask. Every time I move Docker.app to the Application folder, it creates the cli plugins.

You could search for similar issues on GitHub or open a new issue if you don’t find any: 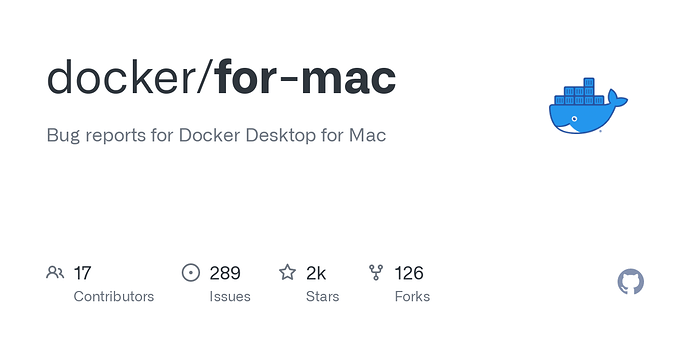 Bug reports for Docker Desktop for Mac. Contribute to docker/for-mac development by creating an account on GitHub.

Thanks for your help though! And for linking that repository.
Turns out more people are ahving the same issue (docker-compose docker: 'compose' is not a docker command · Issue #6569 · docker/for-mac · GitHub). I’ll continue to follow that thread.

These commands were the fix.