How to rename a container in Docker dashboard

My apologies for the trivial question but I’m trying to rename a container to “save it” (and its state). Can I do this via the dashboard. Ideally, I’d just rename ‘makeabilitylabwebsite’, which contains two containers but I can’t figure out how to do this: 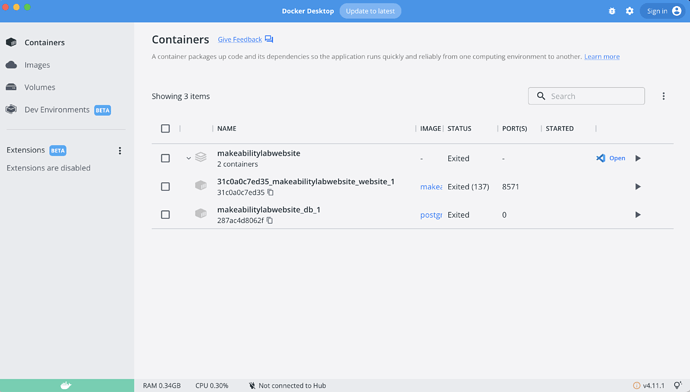 When I’m in the command line, I don’t actually see the top-level ‘makeabilitylabwebsite’, so maybe I have to rename the individual containers?

First of all, you there is no container in a container. You wrote you wanted to rename a container, but you actually tried to rename a Docker Compose project. You have to recreate the project in order to rename it. You could change the top-level “name” parameter in the compose file or change the name of the folder which is the default project name. You can try to rename the containers from the terminal and see if that changes how Docker Desktop shows it, but that could also have some unexpected result. Since Docker Compose is not for running production projects, you can safely delete the project and recreatit with docker compose down and docker compose up -d. If you just change the “name” parameter in the compose file, you can just use docker compose up -d again which should do the “down” step automatically.