Shared Drive is NOT work

I am actually having the same issue as well. I recently reset my credentials as someone had suggested it resolved an issue with Visual Studio allowing them to mount the source path in windows.

I’m joined via an Azure domain on my main account and use PIN logon for my machine, I check the drive I’m looking to share and I then enter the appropriate domain credentials for the account I’m logged in as and then the window disappears, it thinks for a while, and then unchecks my shared drive.

Following the link here fixed my issue of assigning the shared drive.

I just had the most painful experience trying to get this to work, so I thought I’d share what I’ve learned to hopefully spare someone else from similar torture. These issues will almos…

However, visual studio seems much more intent on accessing my logged in user directory. So in that sense, something is wrong with assigning my Azure Active Directory User to the shared drive assignment.

According to the docker log it appears to be fighting over a user path that is access via my local box, and one on my Azure AD.

The provided link is a virus. I recommend removing it from the thread!

I had to mount writable folders to docker containers running on Windows secured with Azure Active Directory. The account was secured only with PIN code, so there was no way to share a drive with docker desktop.

It took me a couple of hours, but eventually I found the workaround, which is explained here: 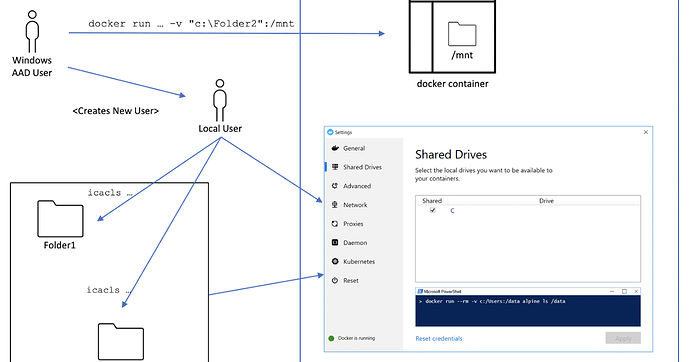 This is a generalized version of the FAQ page I wrote for Appsody . I should note my initial searches for a solution invariably led to this...