I have some problems with Docker Desktop. When I start Docker Desktop, it creates vEthernet(WSL) network adapter (Hyper-V). And after that, my local corporate network became very slow. MS Outlook works very slow also. If i stop Docker and restart my PC, everything works perfect.

How can I solve this issue? Can anyone have this problem?

What happens when you start a WSL distribution without running Docker?

This is just a guess, but if running WSL or Docker makes your network slow and not just the container network, then your corporate network might have a colliding IP address with your WSL network. Maybe your DNS server or a gateway. You can try to run TRACERT on Windows to trace your network routes to an IP address. If you packages have to be resent multiple times before they can actually be sent out, that can slow your traffic.

Run it multiple times until you see a difference in the routing. If you also see that it doesn’t work in one direction, that can help to resolve the issue.

On second thought, if you have IP issues, tracert will not help, but it is still useful.

Hi @rimelek,
Thanks for reply. I’m not running WSL separatly, I’m not sure I can launch this. I just start DockerDesktop.
Funny things is, when I stop DockerDesktop, I still have vEthernet atapter available. Looks like Docker create this adapter with start, and doesnt remove it. When I restart my PC, this vEthernet adapter also removes automatically. And creates with Docker start.
Even if I disable manually, local network still slow. I need restart PC to make speed fast.

PS TRACERT shows everything is OK.

Docker doesn’t create the network adapter. WSL does. And that adapter will be there until you restart your machine. This is why I suggested to try tun run a WSL distribution to find out if the problem is Docker or WSL behind Docker which is more likely I think.

Hi @rimelek, I’ve tried WSL with Ubuntu/Redis, and it looks like it works fine. There is no any vEthernet adapter appears. And my network and Outlook works fine.

Problem starts when I launch DockerDesktop.

Can you pls suggest anything else?

When I start Docker Desktop, my network interface like this:

You mentioned something similar, but I don’t have any Hyper-V in the name of the adapter. And you should not have either. 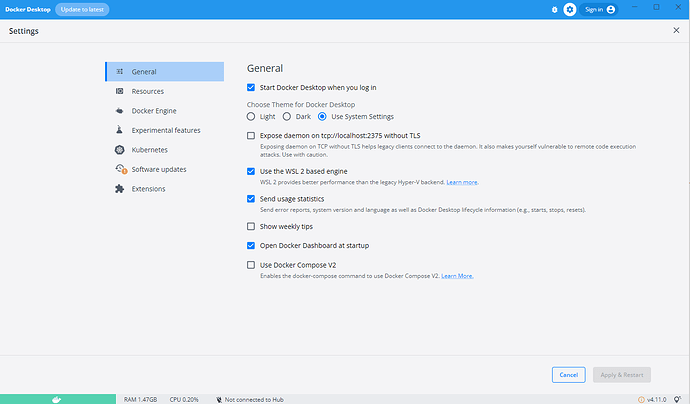 Weird. Looks like your installation is right, but I still don’t understand the adapter. Maybe I missed it on my system, but I don’t remember that “Hyper-V” in the description of the adapter and I searched for it. I will check it again when I am home, but I don’t know what could have happened. Docker Desktop should not affect your LAN network at all.