Docker failed to initialize | Docker Desktop is shutting down

I am facing an issue with Docker for Windows application. This is happening after updating to newer version of 4.3.2. Previous version was running without any issues. After downloading and updating to new version, whenever I launch Docker Desktop I get error message " Docker failed to initialize. Docker Desktop is shutting down. ". 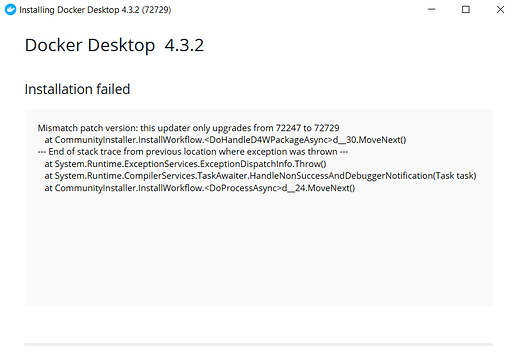 Can anyone please help me resolve this issue as I have already wasted few hours to resolve this.

I am not sure if I should completely uninstall docker and install freshly. If doing so, may remove all existing volumes and containers. I don’t want to lose existing containers and data. BTW, I didn’t sign-in while working with containers.

Your help will be much appreciated.

P.S: I am working with Docker for Windows on Windows 10 machine with WSL2 enabled. I have also enabled Containers and Virtual Machine Platform in Windows Features.

i have the same problem …
I have re install docker desktop and WSL .
DOCKER desktop with adminatration don’t work.

I suddenly started getting “Docker failed to initialize” message with v4.9.1. Thanks to @sourabh1107 's tip I looked at the logs and found

When I opened the file with Notepad+, I saw it had three NULL characters. I tried deleting those first, but then the log showed the error

I then deleted the file, and Docker started up immediately.

While this specific solution may not address a specific occurrence, looking at the log file might provide clues.