Desktop docker not installing on Mac

Docker could not be installed on mac, error message states "Docker” is damaged and can’t be opened. You should move it to the Trash. “You can’t copy the item “Docker” because its name is too long or includes characters that are invalid on the destination volume”

I am having the same issue. When I download docker desktop for Mac Intel and attempt to install it complains the image is corrupt even though the checksum is correct.

I don’t have a Mac with Intel chip. Can you share a screenshot where we can see the error message?

Could you also try to install it from the terminal?

This part of the issue doesn’t seem to be a Docker issue. I downloaded the image and it didn’t have any invalid character in its name. The last time I had similar issue it was with OneDrive. I accidentally put a dot or other character at the end of the filename and macOS understood it, but OneDrive didn’t. It is also possible that the image was fixed since then. Please, try to download it again.

Thanks for taking a look. I was wondering if the image available on the site was the issue. If the image is valid I can keep working on the issue. I just was hoping to rule that possibility out. 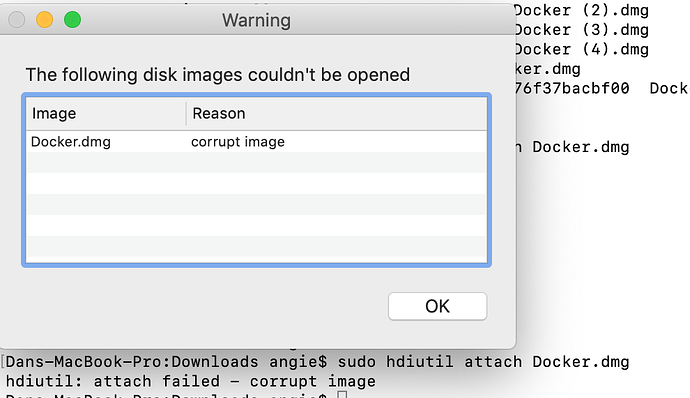 Thank you for the screenshot. I realized I could mount the image without actually installing the intel version on my M1 Mac so I tried it and it works. If you downloaded the image after my previous post, the problem could be on the filesystem or the network. What is the size of the downloaded image?

This is what I see:

Same behavior. It complains the image is corrupt.

As a workaround I went ahead and downloaded the image from Docker Desktop 4.12.0

and it works so I will just go with that. Thank you for your help.

I think the issue ended up being with my OS version. I am using an older computer right now. Thanks again

That could explain it. Thanks for reporting back